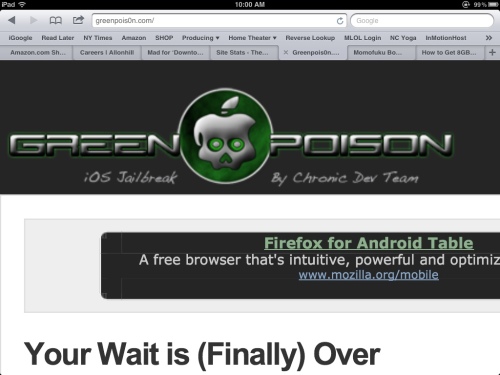 As a full time user of the iPad, I’m always looking for ways to improve the overall experience. Hearing the recent news that the geniuses (no sarcasm or irony) in the dev community had released an untethered jailbreak for iPad 2’s and iPhone 4S’s running iOS 5.0.1 helped me decide to give it a try. What was my experience?

I’d long coveted some of the customization I’d seen on some JB’d iPads and iPhones.  In particular, a more useful, informative lock screen, a dock with more apps permanently moored in it, and a 5 row keyboard were enhancements I was after. Most important of all was quick settings access for radios and other toggles.

My first mistake was trying the jailbreak as soon as I read the news. The greenpois0n servers were getting hit so hard that a process which should take minutes instead took about two hours to slog through.  I won’t bore you with the details (the threads over at macrumors lay it all out pretty clearly), but suffice to say that by the time I was jail broken, I was already a little frustrated.

But once done I had renewed energy and set out to get the features I wanted. I clicked the Cydia icon and started by getting SBSettings, which gives quick and easy access to a pretty wide selection of toggles for the radios and other things like volume, screen brightness, etc.  I was also happily shocked by the wide selection of add-on toggles which could be added.  I picked a skin for it that I liked, set up my activation methods, and I was off. A quick respring later and I had my first feature down.

I then added infinidock, which allowed me to put 8 icons in my dock (hallelujah!), intelliscreenX, which allowed for some pretty great customization of the lock screen and notification center, retinapad, which does a nice job of scaling iPhone apps to the iPad’s screen, and an extension (the name of which I forget…) which allowed the music controls for Apple’s remote app – which I use heavily – to appear at the top of the screen whenever I swiped up to make the multi-tasking dock appear.

I paid handsomely for some of these apps, but was mostly happy to do so for the functionality they offered.  I was also happily surprised that I was able to use Amazon check out to make the purchases, and that doing so would allow me to install the same apps on my iPhone without paying again (for universal apps) much the same way you can in the “legit” app store. I was also pleasantly surprised that some of the apps were accessed via the Settings app, again just like “real” apps. In general, the improvement and experience were sufficient that I decided to jailbreak my iPhone 4 once I had my iPad dialed in.  That’s when the trouble began…

I then moved on to the 5 row keyboard. I feel like I am constantly hitting the “.?123” key on my iPad so this one was important to me!  It sounded like the app was pretty customizable too so I was really looking forward to it. When I drilled down to the app’s page in Cydia, I was surprised to find that I was unable to purchase it because it hadn’t yet been confirmed to work with the most recent 5.0.1 JB’d version of iOS. I took this as a very good sign, figuring that the dev community had made a commitment to quality control and doing whatever they could to ensure a sound overall experience.

That may be the case.  Or, it may also be that some of these apps are sufficiently flaky in design or practice that it’s better to be safe than sorry.  I don’t know what went wrong when things went wrong. But some setting in some app or tweak, or some unintended interaction between apps and tweaks, caused some pretty unfortunate consequences.  Here’s what happened.

I was using the iPad continuously all day and the battery finally gave out. I wanted to continue playing around with things and so I plugged in and sat at my desk.  When the iPad came back to life something was strange. My lock screen picture was distorted, stuck in portrait (even though I lock in landscape) and the pass lock keypad was in the lower left of the screen rather than the center.  Hmm. And when I activated the notification center on the lock screen it too came down in the lower left corner. Hmm.

I typed in my pass code and the fun continued. My desktop now had an iPhone style 4×4 app grid. It wasn’t clear where the other apps had gone. There didn’t seem to be any rhyme or reason as to how things had gotten shuffled around to other pages. The dock still held the correct 8 apps. But everything else was happening iPhone style. Notification center came up in the lower left corner here too. And I was still stuck in portrait.

My first thought was google, or the forums, to ask for help. As I speculated above, some setting in some tweak, or some interaction between apps, was causing some unintended consequences. Basically, it seemed like my iPad thought it was an iPhone and was behaving that way.  I did a respring, a power cycle, then a hard reset, but the situation persisted.

And instead of asking for help, I pulled the plug.  Right to iTunes for a restore to stock and then from a recent backup. I’m sure some of you will say that I gave up too soon.  That if only I’d flicked some toggle in some tweak, or deleted some app or changed some setting, that everything would’ve been fine.

But you know what? This flies in the face of the experience I want to have when I use my iPad. I want everything to “just work.” For the most part, in stock iOS, things do just work. And I almost never need to ask someone to help troubleshoot an issue because there are hardly any issues. I used to have to do that all the time in windows (and even osx on occasion).  I realized quite clearly that I don’t miss that paradigm at all. At all.

Perhaps it’d be different if my iPad were a fun/side device, rather than my primary computer. Or if I had more patience and time to work through these kinds of kinks. And I *really* miss having 8 apps in my dock, and quick access to settings and Remote controls.  But I also missed having everything “just work.” I also feel like Apple will continue to slowly but surely coopt the best stuff allowed by jail breaking into future versions of stock iOS. Until then, my iDevices remain in jail! I appreciate the incredible efforts of the JB community and dev team. It’s just not for me as an all-the-time iPad user.

I make movies. I wield a Les Paul and an iPad. I consume media - copious amounts. And I dabble in assorted nonsense. What do you do? iPadAlone.com Indalo.biz
View all posts by Tony Moody →
This entry was posted in Apps, Features, iOS and tagged Apps, extensions, Features, iOS 5, iPad primary computer, jailbreak. Bookmark the permalink.

12 Responses to My 24 Hour Jailbreak